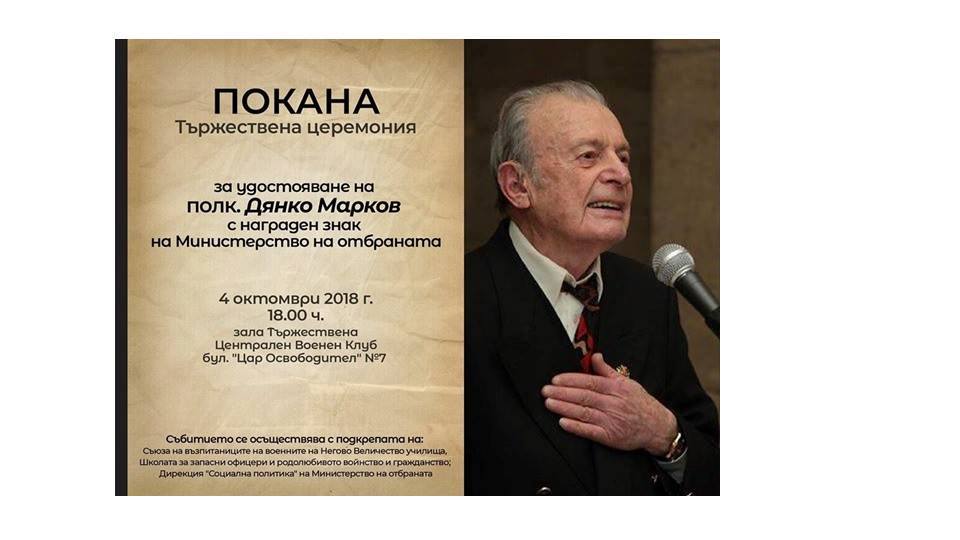 to the Permanent Representative of Bulgaria to the United Nations, with information for institutions and organizations in Bulgaria and internationally, regarding the problem with the recent government award of Dianko Markov, a Nazi

On October 4th, 2018, at a ceremony in Sofia, the Bulgarian Ministry of Defense gave an award to Dianko Markov. This is a person known to the public as a member of the Union of Bulgarian National Legions, a pro-Nazi organization, during World War II. In recent years, Dianko Markov is also known to the public by certain pronouncements, including from the Bulgarian Parliament tribune, which repeat classic Nazi convictions and formulas. For example, the characterization of Jews as “hostile population” with which he explained and justified their deportation to the death camps during the Holocaust. To this moment, he has not apologized for his pronouncements.

The award with a government prize to Dianko Markov caused great public indignation in Bulgaria, as well as here in the U.S. Several organizations in Sofia, recipients of this letter, made public declarations regarding the unacceptability of the act. We share and support their position fully. We also see that the award to Dianko Markov contradicts the commitments of Bulgaria to the United Nations with the signing of the Paris Peace Agreement in 1947, especially in its Part II, article 4. They include the unacceptability of any acts of heroization of people with pro-Nazi past who continue to adhere to Nazi beliefs, as is the case of Dianko Markov.

We address you as the Representative of Bulgaria to the UN, with a request for response:

We will share your answer with all recipients of this letter.

One thought on “Case of Bulgarian government award to Dianko Markov, a Nazi”